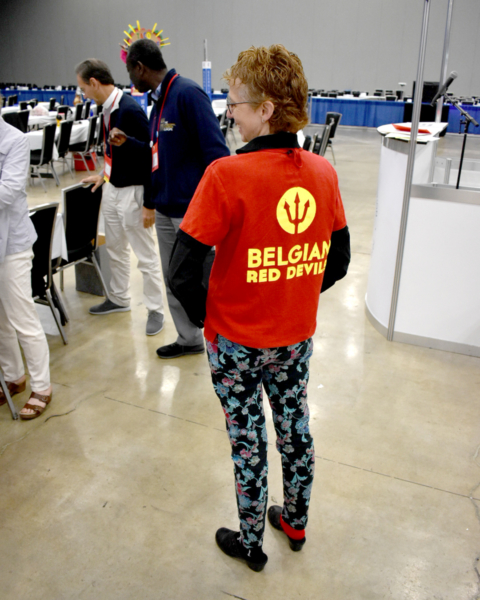 The Rev. Sunny Hallanan shows off her Belgian Red Devils shirt on the House of Deputies floor before the July 10 World Cup semifinals match between Belgium and France. Photo: David Paulsen/Episcopal News Service

[Episcopal News Service – Austin, Texas] There are 110 dioceses represented at the 79thGeneral Convention, and for most of them, World Cup fever passed them by, without a U.S. soccer team to cheer for.

There is one obvious exception: The Convocation of Episcopal Churches in Europe.

It helps that all four teams remaining in the World Cup at the start of July 10 were from Europe, and three of those teams have fans in the Convocation’s deputation. The evidence is as plain as the large French flag stretching across the backs of the deputation’s chairs and the Belgium Red Devils shirt worn by the Rev. Sunny Hallanan of All Saints Episcopal Church in Waterloo, Belgium.

“The general atmosphere in my country is good when we win,” Hallanan said, so you could say she’s also cheering for Belgium in the interest of pastoral care.

The deputation spoke with Episcopal News Service around lunchtime July 10 after attending the latest TEConversation in the House of Deputies, and the afternoon legislative session was scheduled to start at 2:30 p.m. So what to do about the 1 p.m. semifinal match between France and Belgium, which ran through the beginning of the legislative session?

Anne Swardson, a lay deputy from American Cathedral in Paris, said she and the others won’t try to watch the match from the house floor, but they will be waiting for mobile alerts when one team scores or wins.

“You’ll see us react,” said Helena Mbele-Mbong, the other France fan. She is a lay leader deputy from Emmanuel Episcopal Church in Geneva, but lives near the Swiss border in the town of Gex, France.

“If it was the World Series, they would interrupt the session to announce the outcome,” Swardson said, but she and the others from Europe aren’t expecting the Rev. Gay Clark Jennings, the deputies’ president, to do so for the World Cup results. (Post-match update: France beat Belgium, 1-0, and the business of House of Deputies marched on.) 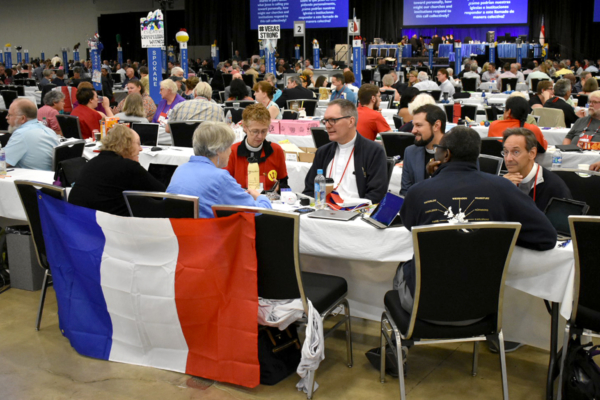 A French flag is stretched from chair to chair as the deputation from the Convocation of Episcopal Churches in Europe discusses the presentations July 10 in the TEConversations session. Photo: David Paulsen/Episcopal News Service

Swardson said she was able to watch three matches earlier in the tournament at a corner sports bar near the Austin Convention Center, and members of the deputation have been following the action whenever possible – but not at the expense of their legislative duties, of course.

“We’ve all been attending, as Gay Jennings would want us to,” Hallanan said. 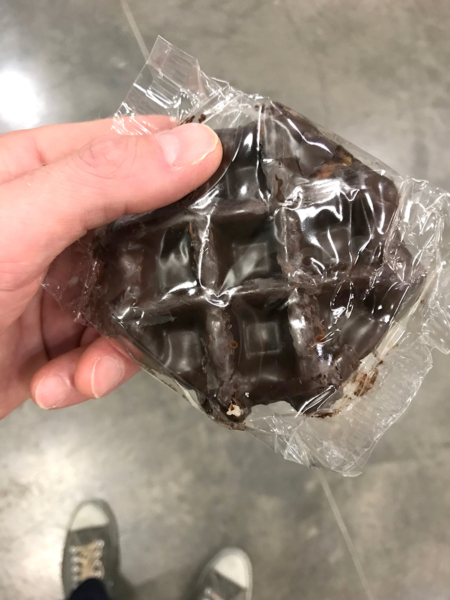 In interest of full disclosure, the Rev. Sunny Hallanan may have offered an ENS reporter a Belgian treat as a bribe to root for Belgium, and it may have worked. Photo: David Paulsen/Episcopal News Service

As for the rest of the remaining World Cup field, the Rev. Christopher Easthill is priest-in-charge at Church of St. Augustine of Canterbury in Weisbaden, Germany, but a native Englander, so he’ll be rooting for England, which plays Croatia on July 11. Yvonne Cockcroft and David Case are both from the Church of the Ascension in Munich, but they too are cheering for their home country of England.

Germany was knocked out of the tournament in an earlier round, making the choice of allegiance that much easier.

And then there is the Rev. Richard Cole, a deputy and deacon from Switzerland. “I’m no longer interested,” he said humbly. His team was another early exit from the World Cup.

As a consolation, though, Cole has Wimbledon to fall back on. The Swiss great Roger Federer has made it to the quarterfinals, with his tennis match scheduled for July 11.