[Episcopal News Service] When the 79th General Convention considers the resolutions proposed by the House of Deputies Committee on the State of the Church, it will confront “tough questions” facing the Episcopal Church in the current social environment. 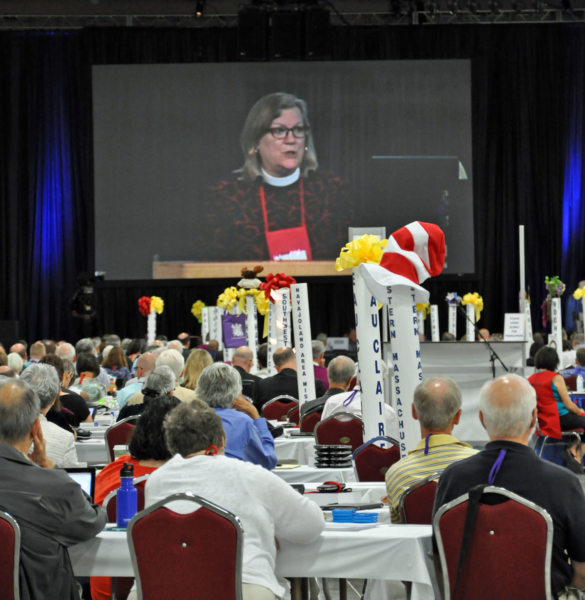 The pressing areas of social justice, multiculturalism and ethnic ministries were all examined during the committee’s three-year study for how the Episcopal Church can better equip itself and minister effectively in multiple social contexts in “these deeply troubled and divisive times,” the committee’s report stated.

If there is an overarching takeaway the committee’s chair, the Rev. Winnie S. Varghese, the Diocese of New York, hopes deputies glean from the report, it’s that “we need to find more ways to release the gifts of the church from communities that we tend to position as ‘being served’ by the church,” she said in an email in response to questions submitted by the Episcopal News Service.

“There is very creative work being done in local ministries that could be used as resources for the whole church, and that a staff empowered to work across areas in ethnic and multicultural work at the churchwide level would be a great gift for us,” she said.

While the committee is mandated to provide the House of Deputies a report on the state of the church, it received the special charge from the Rev. Gay Clark Jennings, deputies’ president, at the beginning of this triennium to focus on social justice and advocacy ministries, multicultural and ethnic ministries, and the Church Pension Group.

Recommending changes to the parochial report also falls under the committee’s purview. Since data gathering is a component of the parochial report, Varghese assumes this is why the State of the Church committee was assigned the task of exploring the rapidly changing context of the Episcopal Church.

“I found the charge from the president of the House of Deputies to the committee challenging and insightful about areas of the church that are high priorities and areas of some interest, concern, maybe confusion,” Varghese said.  “I agree with her that engaging the tough questions is a good use of the wisdom of the broader church.”

To prepare its report, the committee conducted surveys, interviews and reviews of church membership, stewardship and average Sunday attendance and found changes that reflect “modest decline in relation to the recent past,” “radical decline” compared to the 1950s and early 1960s and “a profound and shocking decline when compared to the growth in population of the United States.”

Census data also revealed that while births are barely outpacing deaths in the United State, immigration is fueling the fastest growth in the U.S. population, which in turn has implications for the context of the entire Episcopal Church.

“As a church, more and more of our congregations are visibly diverse, and we must equip ourselves to minister effectively in contexts in which there are multiple social norms, and the weight of discrimination and privilege in society present themselves to us in our congregations,” the committee’s report states.

The committee examined how each of the Ethnic and Multicultural Ministries, which include Latino/Hispanic Ministries, Asian Ministries, Black Ministries and Native American Ministries, began in official roles out of the Episcopal Church Center, recent and current dynamics and strategies of the ministries, and an understanding of the current direction of church leadership with respect to these ministries.

Among its findings is that “racism is active within the structures of the Episcopal Church.”

“Clearly our church has been a prophetic voice in calling out the sin of racism in our society,” the report said, but “little is heard when it comes to exploring the realities within our own church.”

For example, Episcopal churches fail to reflect the diversity of their local communities; clergy from non-dominant cultures face unequal access to theological education, unequal compensation and unequal training and continuing education; and the mutuality of the exchange of gifts, skills, grants, financial gifts and “the way we tend to tell our stories” assumes a flow from the dominant to the “ethnic” minorities rather than sharing with each other or the rest of the church, the report said.

“In the presiding bishop’s ‘The Beloved Community’ plan, we see progress toward understanding the complexity and the need for mutuality in Ethnic and Multicultural Ministries,” the report continued.  “By asking the question, ‘Where is Jesus in this community?’ we shift from the assumption that we are bringing Jesus to the assumption that Jesus is already there with and in the people.”

During interviews with the Church Center’s multicultural missioners, the committee learned that missioners are themselves ministering to diverse communities, nationalities and cultures.  “The result has been the development of strong skills of how to successfully deal with a pluralistic community,” the committee said.  “This is a skill set greatly needed by the church as a whole.”

The committee concluded that the church has “hidden the light of these communities instead of bringing them to the center of church life.”

The committee has proposed resolutions “as practical and doable steps of commitment on a long journey that has already been undertaken and will go on for a long time, a journey that can begin to help us open the deep gifts of developing bridges and mutual accountability and communication.”

Taking up its charge to explore the work of social justice and advocacy ministries, the committee concluded that while the church is “doing many different types of work, social justice work is not robust across the church.”

Most especially, the committee discovered that the understanding of “social justice” varies broadly and that activities across the church tend to fall more “into the realm of alleviation of suffering and the work of charity than the work of justice.”

To clarify misunderstandings, the committee defined social justice work as “acts to address and heal the root cause of the injustice which prompted our need for charity in the first place.”

Committee research did uncover some “anxiety from the grassroots of the church” over whether “social justice preaching” should advocate a particular view on reform or that “emphasis should be on ‘outreach ministry’ but not social justice.”

Respondents to a survey conducted for the committee were eager for resources, suggestions and people to reach for help and “almost all who responded acknowledged a need for this work and many a desire to do it.  They wanted to connect with others doing this work but did not know how to find them.”

The committee is proposing resolutions to help address these concerns. Resolution A056 proposes a task force to study how the Episcopal Church “currently fosters theological understanding and leadership for social justice, and recommend ways to foster theological and practical conversation across the church on this topic.”

Resolution A057 supports strengthening churchwide resources and collaboration to support the grassroots work of the Episcopal Church in the areas of social justice advocacy and ethnic and multicultural ministry.

Faced with the rapidly changing context of the church, the committee also proposed Resolution A053. This requests that a new parochial report be developed that is “appropriate to the current context of the Episcopal Church including but not exclusive to multicultural congregations; aging populations; outposts of ministry in challenging economic contexts; and creative use of space and local engagement, to be administered and shared in networked, visible tools such as the Episcopal Asset Map.”\

“For the sake of data, it is good to measure a few vital things consistently for a long time, but the sake of our formation, and our self-understanding of what makes a great congregation, the committee believes it is important for the church to revisit the entire form to align with what we say today are the characteristics that we value in a church, and make it fully and more robustly electronic, synced with the ways we would record such data, and appropriately shareable through the asset map or a resource like it that helps us to identify and develop networks of mutual support,” she added.

Finally, the committee reviewed how the “traditional” model of clergy employment has changed. For example, more females are clergy and many clerics continue to work after their retirement. The committee asked, in Resolution A060 that a task force be created to study the work on the Church Pension Fund. (See the ENS story  “Ahead of General Convention, Episcopalians consider Church Pension Fund’s service to a changing church” here.)

—Mike Patterson is a San Antonio-based freelance writer and correspondent for the Episcopal News Service. He is a member of ENS General Convention reporting team and can be reached at rmp231@gmail.com.