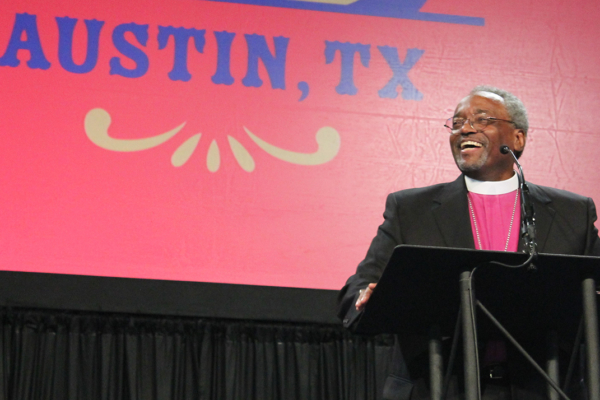 [Episcopal News Service – Austin, Texas] The presiding officers of the Episcopal Church delivered a rousing welcome July 4 to the hundreds of bishops and deputies who have gathered in Texas’ capital city this week for the 79th General Convention.

The remarks by Presiding Bishop Michael Curry and the Rev. Gay Clark Jennings, president of the House of Deputies, each lasted about 20 minutes and set the stage for an active 10 days at the Austin Convention Center and surrounding hotels. Committees began holding hearings earlier in the day on some resolutions, though the legislative session doesn’t officially convene until July 5.

Curry’s and Jennings’ remarks highlighted the work of the church in the past three years while also directly referencing current events that have drawn the church’s response and will be discussed by General Convention, most notably immigration and the Trump administration’s so-called “zero tolerance” policy on border security.

Jennings urged the Episcopalians gathered in the large convention hall to not let themselves remain comfortable in their positions of relative privilege when others are suffering. She set the tone with a reading from Deuteronomy: God “loves the strangers, providing them food and clothing. You shall also love the stranger, for you were strangers in the land of Egypt.”

“On this day, when some of us are perhaps most inclined to feel at home in the United States, the Bible tells us not to get so comfortable,” Jennings said. “We were once strangers. It’s possible that we could be strangers again one day.”

The emphasis on immigration and welcoming refugees coincides with plans for bishops and deputies to travel July 8, after Sunday worship, to an immigration detention facility about 40 minutes from Austin for a prayer service there. General Convention has assigned 10 resolutions to its committees so far under the topic of immigration,  and more could be added by the July 6 filing deadline.

Resolution A178 specifically calls for an end to federal policies that separate migrant children from their parents. President Donald Trump, after facing intense pressure over the family separations, signed an executive order in June to keep migrant families together in detention facilities, though questions remain about how this policy change will be carried out and how separated families will be reunited. 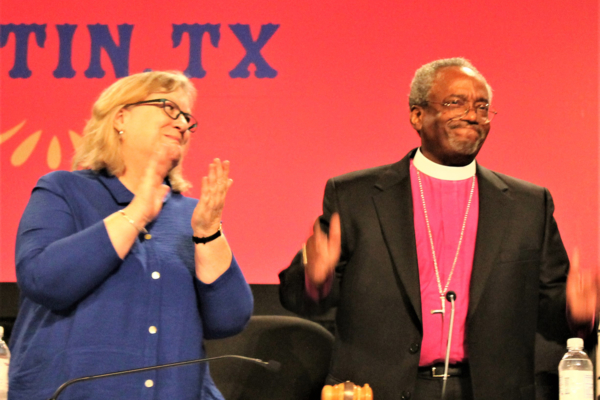 At the welcome gathering on July 4 of the 79th General Convention of the Episcopal Church, the Rev. Gay Clark Jennings, president of the House of Deputies, and Presiding Bishop Michael Curry each addressed the bishops and deputies. Photo: Sharon Tillman/Episcopal News Service

“We cannot lose sight of the parents and the children on the border who have been torn apart by our government,” Jennings said in urging the bishops and deputies to take the immigration resolutions seriously. “We need to be uncomfortable enough to remember these are issues of life and death.”

The issue of immigration also loomed large at a news conference earlier in the day with Curry, Jennings and the Rev. Michael Barlowe, the church’s executive officer and secretary of General Convention.

Jennings hoped General Convention would provide a “counterpoint to a vicious, vindictive interpretation to what it means to be a Christian.” Curry referenced Genesis to underscore that the church is basing its advocacy in scripture.

“We start from a premise that … all people are created in God’s image and likeness,” Curry said. “We must structure our social arrangements and structure our lives in ways that respect the dignity of every human being.”

Curry was also asked about his sermon at the royal wedding in May and what lasting effect it might have on the church’s success in evangelism.

“What I really did pray… one, I didn’t want to mess it up. This was a pretty big congregation,” he said. “But the second, that I could actually say something that would represent the good news of Jesus Christ. In our culture, there are versions and representations that don’t look anything like Jesus.”

An estimated 10,000 people are expected to be in Austin at some point this week and next week for General Convention, whether they be bishops, deputies, church employees, volunteers, exhibitors or others interested in participating somehow in the conversations underway. The centerpiece of the two weeks will be a revival event July 7 at the Palmer Events Center with Curry preaching, followed by a barbecue hosted by the Diocese of Texas.

The excitement heading into this General Convention drew from many sources, from Curry’s reputation as the church’s charismatic “chief evangelism officer” to the spirited debate expected on issues ranging from prayer book updates to policy toward Israel and Palestine. There has been much talk, too, about how the church should respond to concerns raised by the #MeToo movement about sexual harassment and abuse in society and in the church, and the House of Bishops was holding a listening session on those issues in the evening July 4.

“The energy’s high as we begin General Convention, and hope is in the air,” Jennings said at the morning news conference.

That energy filled the convention hall in the afternoon as Curry boomed through his welcoming “presentation” – “this is not a sermon,” he said, to knowing laughs – his voice rising and falling as it echoed off the walls. Bishops and deputies sat with their deputations next to poles labeled with the names of their dioceses, similar to a political party’s convention.

Bishops and deputies gathered with their diocesan deputations for the opening remarks in the convention hall in Austin, Texas, on July 4. Photo: Sharon Tillman/Episcopal News Service

Curry began with an extended metaphor centered around Starbucks, suggesting that an Episcopal Church that forgets its roots is like a coffee chain that forgets it’s about coffee, not cheese goods and other food products. “My brothers and sisters, we are not in the baking cheese business, we’re in the coffee business, and the name of that coffee is Jesus of Nazareth.”

But it was his reference to the Independence Day holiday and to the origins of “Battle Hymn of the Republic” that provided a more profound motif to convey how the Episcopal Church marches on, in service of the Lord.

“I’ve seen the movement of Jesus among us in the church,” Curry said, citing Episcopalians’ relief efforts after hurricanes struck Puerto Rico, the Virgin Islands, Florida and Texas. He said he saw it in how Episcopalians stood with other Christians against the hate groups that marched in Charlottesville, Virginia. He said he saw it in the Episcopalians who rallied behind the Standing Rock Sioux as they sought to protect their drinking water from an oil pipeline.

“God’s truth, this movement, is marching on,” he said.

Jennings opened her remarks by alluding to the popularity of Curry’s sermons and joking that she occupied “what is widely acknowledged to be one of the least coveted speaking spots in all of Christendom, the person who comes after Michael Curry.”

Jennings, too, spoke forcefully to the crowd about its duty to follow the way of Jesus.

“We are embarking on hard and holy work in the next 10 days. We are going to talk about some of the issues that cut close to our heart,” she said. “Let us do our work as strangers and sojourners bound for kingdom of God.”

Among the other speakers at the welcoming event were National Episcopal Church Women President Lisa Towle and Church Pension Group President Mary Kate Wold. Barlowe served as master of ceremonies.

“We are delighted to be in the Diocese of Texas,” Barlowe said, a sentiment he has repeated often this week, with slight variations. “You all have welcomed us with legendary Texas hospitality.”

Barlowe introduced Diocese of Texas Bishop C. Andrew Doyle, who said Episcopalians in Texas were proud to stand with the church on border issues and against the epidemic of gun violence in the country. And Doyle mentioned that Houston, Texas, hosted the General Convention in 1970, when women first were allowed to serve as deputies.

Doyle also gave the convention a taste of Texas talk as it pertains to the Jesus Movement.

“Texas is big, and just about whatever you wish to tell us about, we’re going to listen politely, and then we will tell you about how there’s one bigger, larger, stronger, stranger, more bizarre or weird than whatever you have,” he said. “Texans love to imagine crazy, big ideas like the Jesus Movement, and we are glad to be part of the very big Episcopal Church.”