With Christmas Eve on a Sunday, churches faced unavoidable ‘conundrum’ in scheduling Advent 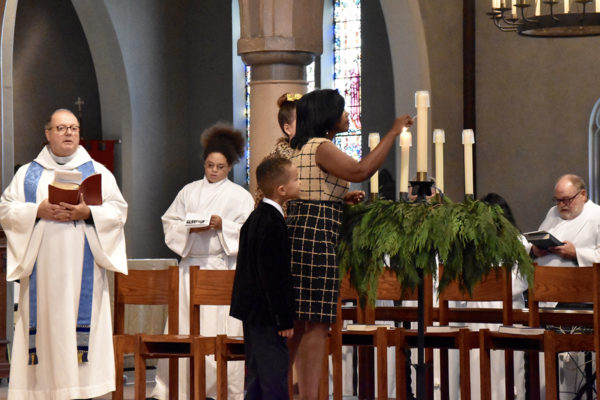 [Episcopal News Service] What to do about Dec. 24?

It’s a liturgical debate that has been brewing in congregations and clerical forums all season, based on a church calendar that this year has Christmas Eve landing on the Fourth Sunday of Advent. Every parish in the Episcopal Church must answer the question, as a matter of scheduling, and there are strong views on both sides.

“It’s the Episcopal Church. Everything we do leads to debate,” said the Rev. Keith Voets, a New York City priest who helps moderate a Facebook discussion group on Episcopal liturgy.

The conundrum for parish leaders goes something like this: If they load up on Christmas Eve services while maintaining their full Sunday morning schedule, they risk burning out their clergy and volunteers. But to reduce or eliminate the morning services could be seen as curtailing Advent.

The potential solutions churchwide are as plentiful as Advent candles, though the scenarios playing out at Episcopal churches across the country generally fall into a few categories. Episcopal News Service surveyed more than a dozen congregations by phone and email and found that church leaders were basing their scheduling decisions on tradition, local needs and, in some cases, a bit of experimentation.

For large congregations like All Saints Episcopal Church in Beverly Hills, California, the plan is to offer something like a marathon of services.

“If you’re preaching one service, you might as well preach two,” the Rev. Nat Katz, associate rector at All Saints, said.

All Saints won’t stop at two services. In addition to worshiping at 8 a.m. and 10 a.m. for the Fourth Sunday of Advent, the congregation is expecting big turnout at its four Christmas Eve services, at 11:30 a.m., and 4, 8 and 11 p.m.

Average Sunday attendance at All Saints is around 300, but Katz predicted an overflow crowd of about 800 at its 4 p.m. family service. It helps to have three priests sharing the burden, though Katz, who is in charge of scheduling volunteers, said he still was working to line up acolytes and Eucharistic ministers for the church’s seven services, including one Christmas Day service.

“When we sat around a table and talked about our community, we thought … there are enough folks in our community that would want to observe both Advent IV and Christmas Eve,” he said. “On a spiritual and liturgical sense for us, it is absolutely and fundamentally important that the Advent journey be completed to come and observe the Feast of the Nativity.”

At the other end of the spectrum are small parishes like Church of the Messiah in Chester, New Jersey, which moved its Advent calendar up by a week to avoid any overlap on Dec. 24.

“If the Advent police have a problem, I’ll respond to it, but the calendar is a challenge this year,” the Rev. Margaret Otterburn told ENS.

As rector at Church of the Messiah, Otterburn realized back in early October that with Christmas Eve falling on a Sunday, she might not get many people attending church that morning. The congregation’s 4 p.m. pageant service for Christmas Eve, on the other hand, is one of the biggest of the year, drawing about 130 people.

So, while the Fourth Sunday of Advent will be celebrated on Dec. 24 in most churches, it was celebrated on Dec. 17 at Church of the Messiah. Parishioners who want to attend a morning service Dec. 24 will have that option, but it will be a very simple Christmas Eve service.

“Advent is a very important time for us,” Otterburn said. “So, the reason for moving was for all of us to experience Advent.”

For the record, the Episcopal Church has no Advent Police, but it does have the Book of Common Prayer, which establishes a four-week Advent schedule, the same one followed by other Christian denominations.

“We don’t get to adjust the liturgical calendar for our own needs,” Voets said.

Voets, priest-in-charge at Church of St. Alban the Martyr in Queens, New York, has been a moderator for the past few years of the Facebook group Rubric: Dissecting the Episcopal Liturgy.  The group, with more than 1,000 members, many of them Episcopal clergy, discusses interpretations of the prayer book. Voets sees it as a resource, not a forum encouraging tense debate.

But discussion of Advent scheduling picked up in November, in reaction to the decision by some churches to move up Christ the King Sunday to make way for an earlier Advent, as Church of the Messiah did. One group member called the Dec. 24 question a “fabricated conundrum,” one easily solved – Eucharist in the morning, Eucharist in the evening.

Several members noted this is nothing new. Christmas Eve falls on Advent IV every six years or so, though by 2017 it hadn’t happened for 11 years because of how leap years affected the calendar.

Voets leads a mostly West Indian congregation with about 150 average attendance on Sunday. He describes it as “Anglo-Catholic,” and members are comfortable with the expectation that they attend an Advent service in the morning and the church’s one Christmas Eve service, at 11 p.m. The only change he made was to combine the two regular Sunday morning services into one.

The Book of Common Prayer says “the Sundays of Advent are always the four Sundays before Christmas Day, whether it occurs on a Sunday or a weekday.” That would seem to not leave a lot of wiggle room, though Ruth Meyers, a liturgics professor, said churches still have some flexibility with Sunday scheduling.

“I think the question is what do you do with your Sunday morning schedule, and I think that’s very much dependent on the particular context, what the expectation is in your particular congregation,” said Meyers, who teaches at Church Divinity School of the Pacific in Berkeley, California, and serves as dean of academic affairs.

The compact schedule could even serve to enhance the Advent experience, Meyers said. It is a season of preparation, and the final Sunday leads directly into the story of Jesus’ birth.

She also is intrigued by a movement to extend the season of Advent from four to seven weeks, as St. John’s Episcopal Cathedral in Knoxville, Tennessee, did this year.

Think Dec. 17 was the Third Sunday in Advent? At St. John’s, it was the Sixth Sunday of Advent.

Jason Overall, who helped develop the expanded Advent program as the cathedral’s director of music, said the aim was “reclaiming Advent” through a more meaningful observance of the season, bucking a popular culture that immerses itself in Christmas immediately after Thanksgiving.

He and other cathedral leaders had discussed expanding Advent for the past three years, and their justification invokes centuries of church history, when Advent’s length fluctuated, and sometimes varied from community to community. A four-week Advent hasn’t always been the norm.

“As Episcopalians, we feel like if something has been done twice, that’s how it’s always been done,” Overall said. “We were trying to free ourselves from that.”

He also acknowledged that the difficulty of scheduling services on Dec. 24 was at least one catalyst to experimenting with an earlier Advent this year at St. John’s. The cathedral will offer six services that day, all of them for Christmas Eve.

And Overall agreed with those who would call it “regrettable” that by expanding and moving Advent this year, St. John’s was going against the “common” in the Book of Common Prayer. That was a consideration, but he and other cathedral leaders felt that the positives of the plan outweighed the negatives. It was the right move for St. John’s, he said, and they aren’t trying to persuade other congregations to do the same.

Most of the other congregations who responded to ENS’ inquiries have made more modest changes to their schedules.

“We planned earlier than ever before because we saw all the conflicts and compression of the season, and made adjustments in scheduling activities,” said Susan Kleinwechter, communications director at St. Martin-in-the-Fields.

All Saints in Beverly Hills, despite its marathon of services, has reduced its normal three Sunday services to two, as has All Saints Episcopal Church in Pasadena, California.

Other churches are planning simple services for Sunday morning and saving their congregations’ collective energy for their Christmas Eve services. St. Benedict’s Episcopal Church in Smyrna, Georgia, opted for a said service Sunday morning and Christmas Day, while the Christmas Eve services will have full music. And St. Mark’s Episcopal Church in Milwaukee, Wisconsin, is offering Morning Prayer for its Advent service at 9:30 a.m. followed by a family service at 4 p.m. and a festive Eucharist at 11 p.m.

“Every decision struck me as sort of having a downside,” said the Rev. Ian Burch, rector at St. Mark’s, but he didn’t want to mix up the schedule for the 90 to 120 people who normally attend on Sundays.

“I’m allergic to changing service times. … It’s sort of Kryptonite to church growth,” he said. “At the same time, I didn’t see a way that three Eucharists for a parish my size made a lot of sense.”

He and other church leaders began planning for Advent and Christmas back in early October. An expanded schedule isn’t just taxing on a congregation’s priests, he said. It also requires a lot from the volunteers, from the altar guild and flower guild to the musicians.

“It doesn’t just happen. There are no elves in the church. It’s not magic,” he said. The congregation also spends a lot of time planning because Christmas Eve is “an amazing evangelism opportunity, so don’t miss it and don’t be sloppy.”

With many Americans feeling crunched for time by jam-packed schedules, it may be too much to expect parishioners to attend two or three services in a 30-hour period, but Burch also doesn’t want to forget the parishioners who are likely to be in church every day it is open. He wants to give them that option, especially around Christmas.

“Removing choices is asking the church to shrink. If there are 15 people there in the morning, that’s a really beautiful number,” he said. Having more services at significant times is a lot of work, but “it’s worth it.”