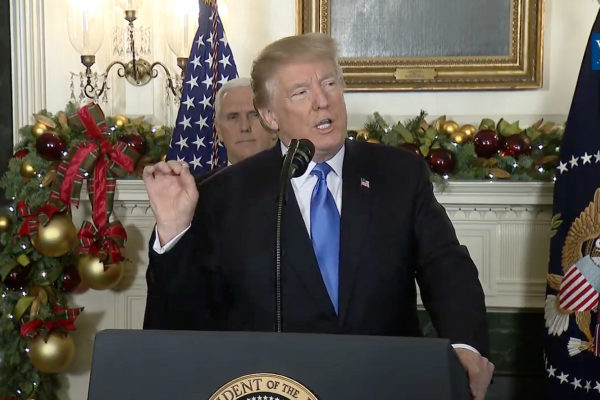 “Today we finally acknowledge the obvious, that Jerusalem is Israel’s capital,” Trump said at the White House in remarks that lasted just over 10 minutes. “This is nothing more or less than a recognition of reality. It is also the right thing to do.”

Leaders of the Christian churches in Jerusalem, including the Anglican primate, released a letter to Trump on Dec. 6 before his announcement warning that the decision “will yield increased hatred, conflict, violence and suffering in Jerusalem and the Holy Land, moving us farther from the goal of unity and deeper toward destructive division.”

The Episcopal Church’s Office of Government Relations followed up with a statement Dec. 6 backing the Christian church leaders in Jerusalem and opposing Trump’s vow to move the U.S. embassy to Jerusalem.

“This decision could have profound ramifications on the peace process and the future of a two-state solution, and it could have a negative impact throughout the region and with key U.S. allies,” Office of Government Relations said. “The Episcopal Church Office is joining with Churches for Middle East Peace and many other organizations in opposing any effort to move the Embassy.”

Trump, in changing U.S. policy on Jerusalem, was taking a step toward fulfilling a campaign pledge. Moving the U.S. embassy from Tel Aviv to Jerusalem has strong support among American evangelicals and pro-Israel Jews.

“The Israeli government, its parliament, courts, and prime minister, have been located in Jerusalem since just after the birth of the state,” Jewish Council for Public Affairs, an organization that represents 16 national Jewish agencies in the U.S., said in a statement applauding Trump’s decision. “We agree with the president that Israel, like all countries, has the right to determine the location of its capital.”

The Episcopal Church’s stance on the issue was set by General Convention in a 1985 resolution, in which the church “expresses its opposition to the movement of the United States Embassy from Tel Aviv to Jerusalem, except within the context of a broad resolution of Middle East problems, with the status of Jerusalem having been determined by negotiation and not by unilateral action by any one community, religion, race or nation.”

Archbishop of Canterbury Justin Welby tweeted that keeping the status quo on Jerusalem “is one of the few stable elements of hope for peace and reconciliation.”

The status quo of the City of Jerusalem is one of the few stable elements of hope for peace and reconciliation for Christians, Jews and Muslims in the Holy Lands. Pray for the peace of Jerusalem.

Also earlier in the day, Pope Francis, in his weekly general audience at the Vatican, called Jerusalem “a unique city, sacred to Jews, Christians and Muslims, where the Holy Places for the respective religions are venerated, and it has a special vocation to peace.” He raised concerns that changing the city’s status quo could lead to greater conflict.

“Such a step breaks with the longstanding international consensus, and almost seven decades of established American policy, that the status of Jerusalem remains to be settled,” said the Rev. Olav Fykse Tveit, World Council of Churches’ general secretary. “It also pre-empts a negotiated resolution of this most difficult issue in any final peace agreement, which must be achieved between Israelis and Palestinians themselves.”

Episcopal Public Policy Network issued a policy alert in February opposing relocation of the embassy. At that time, the Office of Government Relations advocated the church’s position to members of Congress in partnership with Churches for Middle East Peace, an ecumenical coalition of 27 American denominations that includes the Episcopal Church.

On Dec. 5, Churches for Middle East Peace repeated its objection to changing U.S. policy toward Jerusalem.

“Rather than being a broker for peace, the U.S. will be undermining trust and making the resumption of meaningful negotiations and achieving a viable solution all the more difficult, if not impossible,” said the Rev. Mae Elise Cannon, executive director of Churches for Middle East Peace.

Trump, in his remarks Dec. 6, affirmed the United States’ commitment to helping facilitate Middle East peace and to a two-state solution that has the support of both sides. But he defended his decision to recognize Jerusalem as Israel’s capital by saying past policy has not gotten the Israelis and Palestinians any closer to a lasting peace.

Trump cited a law Congress passed in 1995 calling for the U.S. embassy to be moved to Jerusalem. Every president since Bill Clinton has waived that requirement six months at a time, citing security concerns, and Trump initially followed suit in February. Now, by recognizing Jerusalem as the Israeli capital, the president is putting embassy relocation plans in motion.

For decades, the United Nations has insisted on Jerusalem’s unique status as an “international city” despite Israel declaring it as the nation’s capital in 1980. Because of that history, 86 countries have their embassies in Tel Aviv, while none now has an embassy in Jerusalem, according to CNN. And while most of the Israeli government is based in West Jerusalem, East Jerusalem is considered by much of the world to be an occupied territory, which the Palestinians hope will someday become the capital of a Palestinian state.

The city is considered a sacred place for Jews, Muslims and Christians alike, which Trump alluded to in his remarks on Dec. 6. “Jerusalem is today and must remain a place where Jews pray at the Western Wall, where Christians walk the Stations of the Cross and where Muslims worship at al-Aqsa Mosque.”

The mosque is at a site known by Muslims as the Noble Sanctuary and by Jews as the Temple Mount, and it was the focus of renewed tensions earlier this year between Israelis and Palestinians after a deadly July 14 shooting between Arab-Israeli gunman and Israeli policemen prompted the mosque’s closure. https://www.episcopalchurch.org/library/article/anglican-primate-joins-christian-leaders-jerusalem-calling-calm-holy-site

It was the first time the mosque had been closed for Friday prayers in 17 years. Protests escalated when the mosque was reopened with new metal detectors, but the scanners were removed days later.