[Episcopal News Service] The opioid epidemic in the United States continues to affect millions of Americans, with tens of thousands every year dying from overdoses, and some of the most vulnerable to the epidemic’s effects are the users’ children and other young family members.

The Episcopal Church’s Province III, which includes many of the communities hit hardest by the rise in opioid addiction in recent years, is partnering with the Diocese of Maryland’s Claggett Center and the SpiritWorks Foundation to offer a free weeklong summer camp, Camp Spirit Song, in support of children struggling with a parent’s or loved one’s addiction.

“Some of the kids think it’s their fault, and if they behave better, mom or dad wouldn’t do that,” said the Rev. Jan Brown, an Episcopal deacon and founder of SpiritWorks, a Virginia-based addiction recovery support organization. One message of Camp Spirit Song will be that it’s not their fault, Brown told Episcopal News Service.

“The hope with this is they will feel safe, and … they’ll know that there are other people going through this too,” she said.

The camp is open to children in grades 4 to 8, and space still is available for new registrations. Held at the Claggett Center in Buckeystown, Maryland, it will follow a curriculum for children of addicted parents that was developed through the U.S. Department of Health and Human Services.

Anyone interested in info on registering a child for Camp Spirit Song should visit the center’s website or email ryoe@claggettcenter.org.

“Camp Spirit Song creates a setting in which children can participate in meaningful, compassionate group sessions which honor their experiences and inherent worth, while enjoying all the opportunities that summer camp provides for kids to be kids,” said Rita Yoe, the Claggett Center’s programs coordinator, in a news release.

The idea for the camp grew out of conversations between Claggett Center officials and members of the Province III Opioid Response Task Force. Province III encompasses 13 dioceses in Delaware, Maryland, Pennsylvania, Virginia and West Virginia, and it has been active in developing educational and outreach programs in response to the opioid crisis, including a recent pilgrimage to Huntington, West Virginia, to witness that community’s progress.

Dina van Klavern, co-chair of the Province III task force, previously served as director of the Claggett Center’s summer camps through 2014, and she also had gotten to know Brown, who serves on the task force and is a deacon at Bruton Parish Episcopal Church in Williamsburg, Virginia.

“She has mentioned and described a need since we began this task force to bring back a camp for families torn apart by addiction,” van Klavern said. 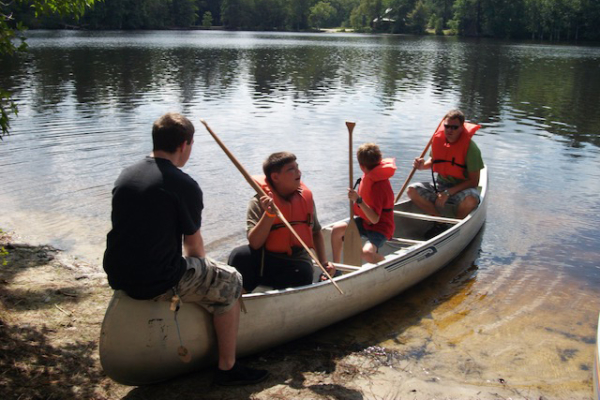 SpiritWorks, which Brown started in 2005, offered such a camp years ago but was not able to keep it going. Then last year, van Klavern learned that the Claggett Center would have an open week in its summer camp schedule for 2019, and she and Brown began talking with center officials about offering a curriculum for children affected by addiction.

Their goal was to identify at least 15 and up to 40 campers to participate, with outside donations covering the cost of the camp for families. Registration so far has been slow, but van Klavern and Brown hope in the coming weeks to find additional children from across the province’s dioceses who would benefit from the program. It will include a strong spiritual component, though participants need not be Episcopalians.

“Anyone who’s really had their world turned upside down by heroin and opioid use,” van Klavern explained. What the camp offers is “a place of healing and safety, a place without any discrimination and stigma for the family and the child.”

The trauma associated with a family member’s opioid use can have a profound negative effect on children. Prenatal opioid exposure and the upheaval of foster care sometimes play roles, but parental opioid use itself is considered a traumatic event for children, according to a report by the National Academy of State Health Policy.

“Children affected by parental substance use are at higher risk of behavioral and psychosocial problems,” the report says. Such trauma also is “strongly associated with a wide range of negative consequences for health and well-being later in life, such as chronic health conditions, risky behaviors, lower academic achievement, and early death.”

The report, geared toward influencing state policies on the opioid epidemic, recommends developing a “whole family” approach. Such an approach is affirmed by the curriculum to be used by Camp Spirit Song.

“The entire family can be strengthened, their stress levels reduced, their resilience enhanced, when services are provided to these children,” a forward to the curriculum says.

Brown brings personal experience to this work. She is 32 years into her own long-term recovery from addiction, including to prescription painkillers. In recent decades, she has lamented the rise nationwide in opioid and painkiller addiction and the toll it takes on families. Its effects are distinct from other types of addictions, such as alcoholism, she said.

“The intensity is one piece that’s changed, and just how dangerous,” she said. “People are leaving pills hanging around, and young people are finding them.” She noted some describe the epidemic as “a disease of despair, and these young people are growing up in households where there is no hope.”

She sees Camp Spirit Song, then, as a “wonderful opportunity” to show that faith communities can make a positive difference in these children’s lives.