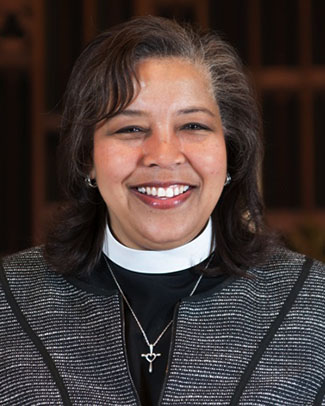 The Rev. Carlye J. Hughes was elected the 11th bishop of the Diocese of Newark during a special convention on May 19, 2018, at St. Peter’s Episcopal Church in Morristown, New Jersey. Photo: Nina Nicholson/Diocese of Newark

The first woman and first African-American to be elected bishop in the Diocese of Newark, Hughes, 59, is currently rector of Trinity Episcopal Church in Fort Worth, Texas, the Diocese of Fort Worth, and was one of three nominees.

In order to be elected, a candidate needed to receive a simple majority of votes from both the clergy and the lay delegates, voting separately as orders in the same balloting round. Hughes was elected on the first ballot, receiving 62 of 116 clergy votes and 141 of 241 lay votes.

The other two nominees were:

Hughes was ordained a priest in 2005 after graduating from Virginia Theological Seminary, and has served as rector of Trinity Episcopal Church in the continuing Diocese of Fort Worth since 2012. No stranger to the northeast, her first call was to St. James’ Church on Manhattan’s Upper East Side. Before ordination, she worked as a corporate trainer. She is married to David Smedley. More about the Rev. Carlye J. Hughes.

Pending consent of a majority of the bishops with jurisdiction and the diocesan standing committees, Hughes will be ordained and consecrated September 22, 2018, at the New Jersey Performing Arts Center in Newark. Presiding Bishop Michael Curry will preside.

-Nina Nicholson is the director of communications for the Diocese of Newark.