Joint Standing Committee on Program, Budget and Finance has 27 members plus other General Convention officers and support staff, as well as staff members from the treasurer’s office. Photo: Mary Frances Schjonberg/Episcopal New Service

[Episcopal News Service –Austin, Texas] The Joint Standing Committee on Program, Budget and Finance (PB&F) held the first of two planned open hearings the evening of July 5 to hear from Episcopalians asking that the committee help fund their ministries.

Nearly 30 witnesses spoke to the committee during the 90-minute hearing at the JW Marriott Hotel two blocks from convention’s home in the Austin Convention Center. Among the topics of concern included funding for church planting and congregational redevelopment, Christian formation programs, the work of a proposed Task Force for Women, Truth, and Reconciliation, bringing the Episcopalians in Cuba back into the Episcopal Church, youth ministry, new resources for sexual misconduct-prevention training, the work of the Archives of the Episcopal Church and sustainability work in the church’s indigenous ministries.

PB&F has already begun work on the draft 2019-2021 triennium budget that Executive Council passed in January.

The total income in council’s draft budget of $133.7 million would pay for an equal amount in expenses, with a very small surplus of just $2,654. The triennial budget is up about $8.7 million from that approved by the 2015 meeting of General Convention for the current 2016-2018 triennium.

The Episcopal Church’s three-year budgets are funded primarily by pledges from the church’s 109 dioceses and three regional areas. Each year’s annual giving in the three-year budget is based on a diocese’s income two years earlier, minus $150,000. For the 2016-18 budget, dioceses were asked to give 18 percent in 2016, 16.5 percent in 2017 and 15 percent in 2018. Not all dioceses pay the full asking for a variety of reasons.

At the 2015 meeting of General Convention, bishops and deputies turned the current voluntary asking system into a mandatory assessment, beginning with the 2019-2021 budget cycle. Council’s draft anticipates that some dioceses will get full or partial waivers of those payments under a system that will go into effect in the new triennium.

Without getting a waiver, a diocese that does not pay the full assessment will be unable to get grants or loans from the Domestic and Foreign Missionary Society.

(The Domestic and Foreign Missionary Society is the name under which the Episcopal Church is incorporated, conducts business and carries out mission.)

Council’s draft budget is based on a 15 percent mandatory assessment, and it sets money aside for those full or partial waives. 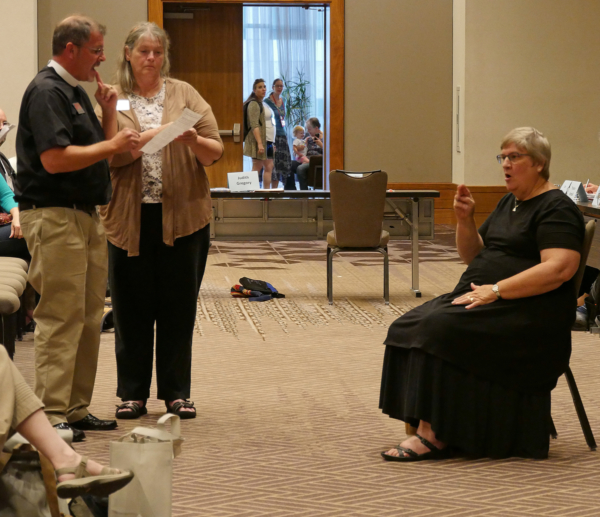 The Rev. Richard Mahaffey, president of the Episcopal Conference of the Deaf, testifies with the help of spoken-word and signing translators. Photo: Mary Frances Schjonberg/Episcopal New Service

PB&F is being asked to consider Resolution B001 to scrap the mandatory across-the-board assessment and adopt a system of diocesan funding of the church’s triennial budget based on how much each diocese spends on average per congregation in their annual budget. Diocese of Georgia Bishop Scott Benhase, proposer of the resolution, told the committee that it “will actually increase revenue for the church and it will make your jobs much easier… so you can thank me later.”

He compared the current system to a flat income tax, which he said is “regressive” and “not helpful to those on the lower ends.” Benhase said that most economist argue that a “progressive” system such as the one he suggests “is much fairer and it’s more just.”

PB&F plans another open hearing on the budget at 1:15 p.m. July 6. Its final budget must be presented to a joint session of the Houses of Bishops and Deputies no later than the third day before convention’s scheduled adjournment. According to the draft convention schedule, that presentation is set to take place at 10:30 a.m. CDT on July 11.

The bishops and deputies then separately debate and vote on the budget.