Bishops lament and confess the church’s role in sexual harassment, exploitation and abuse 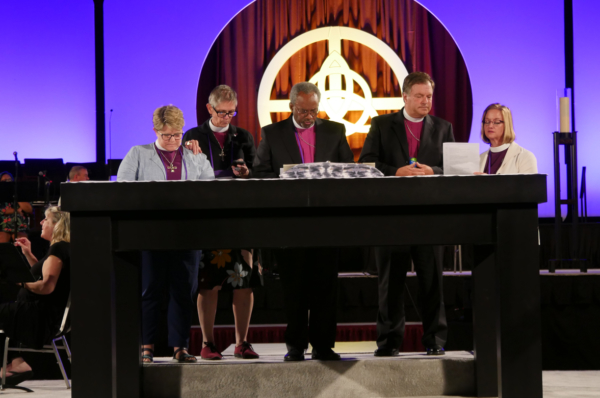 [Episcopal News Service – Austin, Texas] In a hushed worship space in the Austin Convention Center late in the afternoon of July 4, bishops of the Episcopal Church stood and collectively offered laments and confession for the church’s role in sexual harassment, exploitation and abuse in a service called a “Liturgy of Listening.”

The service featured 12 stories – six from women and six from men – from victims of sexual misconduct perpetrated by someone in the church. These were among 40 stories submitted by people in May in response to a bishops’ request for reflections from those hurt by the church. 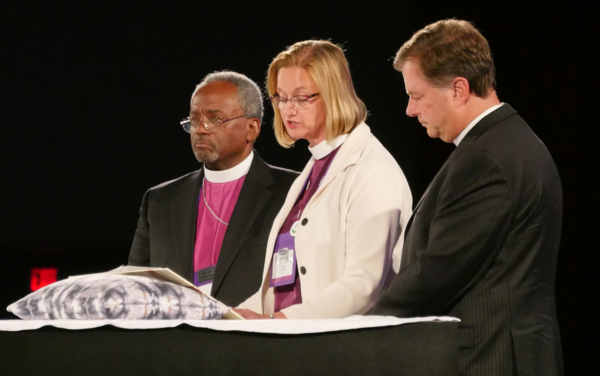 House of Bishops Vice President and El Camino Real Bishop Mary Gray-Reeves reads one of the 12 stories that formed the backbone of the “Liturgy of Listening” July 4. Standing at the altar with her are Presiding Bishop Michael Curry and Diocese of Olympia Bishop Greg Rickel. Photo: Mary Frances Schjonberg/Episcopal News Service

Each story was read by a bishop of the same gender as the victim, in first-person accounts of what had happened to them and how the church’s response had failed them. The stories included a church employee made uncomfortable by lewd comments from the male rector; an ordinand placed in a sexually awkward position by her bishop; a young man seduced by his priest’s wife; a woman raped by a priest from whom she was receiving spiritual direction; a choir boy subjected to emotional, physical and sexual abuse. One included a plea that bishops care for all vulnerable people in their dioceses and “take seriously the plague of sexual misconduct that affects our branch of the Jesus Movement.”

The service was planned by Central New York Bishop DeDe Duncan-Probe, who chairs the House of Bishops’ Pastoral Response to #MeToo Planning Team. In remarks in Episcopal News Service in late June, she said the service was designed to help set a framework for General Convention’s consideration of resolutions dealing with sexual misconduct, exploitation and gender disparity. These sins occur “because we aren’t seeing the image of Christ in one another,” she told ENS.

This format was chosen, Duncan-Probe said, because “Episcopalians believe in the transformational power of liturgy.” 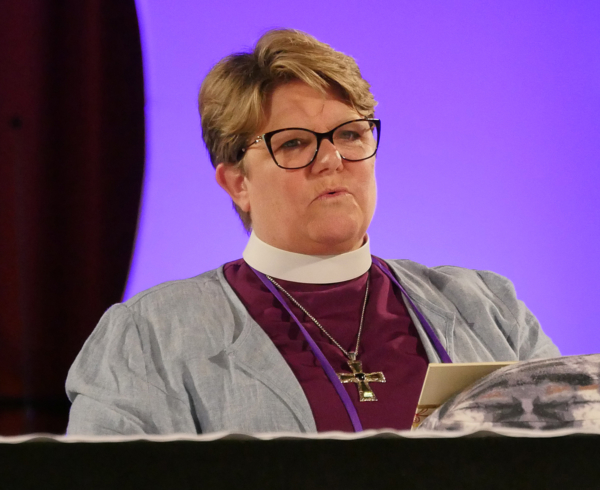 After the service opened with two reflective songs, Presiding Bishop Michael Curry said that “the Church has failed her people.” He said that as successors to the apostles, bishops “hold a particular responsibility to acknowledge the past and help the church move forward.” He said the service would be “a sacred container” for stories of abuse that never should have happened. He added, “There is pain in these stories, there is courage in the people who have offered them.” He then called on bishops and the entire church to honor the courage and vulnerability of victims by being committed to the work of repentance and reconciliation.

Several hundred people attended the 90-minute service, and almost 1,000 others watched via livestream on the General Convention Media Hub.

Planners also had teams of people available to provide emotional or spiritual support to anyone who needed it. As the service ended in silence, some people wiped away tears and others hugged those nearby.