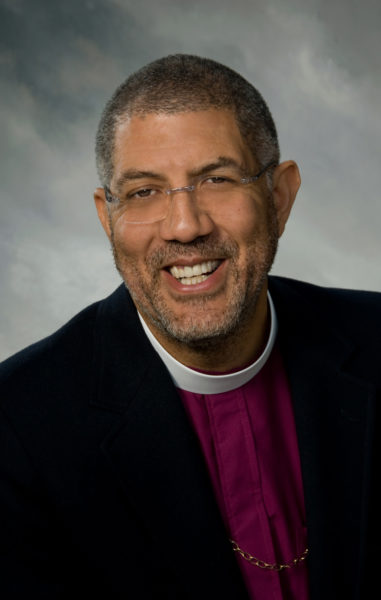 [Episcopal Diocese of Atlanta] Episcopal Bishop Robert Wright has been appointed to the Supreme Court of Georgia’s Committee on Justice For Children.

Wright, bishop of the Diocese of Atlanta, is the only faith leader on the 29-member committee charged with improving justice for children and families involved in Georgia’s juvenile courts.

Formed in 1995 to apply data-based improvements to Georgia’s child dependency cases, the Justice for Children (J4C) committee expanded its scope of work in 2017 to include the full spectrum of juvenile court cases.

“The list is long, but the work is vital,” Wright said, following his appointment to J4C. “I’m committed to leveraging my experience and perspective as an adopted child, the parent of an adopted child and chief pastor to thousands of families facing the crisis of broken ties in my work on the committee.”

Wright was appointed to the J4C with two other new members; Virginia Pryor, the interim director of the Georgia Division of Family and Children Services and Georgia Appleseed Center for Law & Justice Executive Director Talley Wells.

“Bishop Wright is a passionate and eloquent advocate for children, and for the special needs of foster children in particular,” Nahmias said. “We look forward to the experiences, ideas, and contacts he will bring to the Supreme Court’s Justice for Children Committee as we seek to improve the justice system for Georgia’s children.”

Wright was born in a Roman Catholic orphanage in Pittsburgh, Pennsylvania, and was adopted at 9 months of age. After graduating high school, he served five years in the U.S. Navy as a helicopter crew chief and search and rescue diver.

While attending Howard University in Washington, D.C. where he earned degrees in history and political science, Wright worked as a child advocate for two mayors and for the Children’s Defense Fund.

Wright earned an M.Div. from Virginia Theological Seminary, and has been awarded honorary doctor of divinity degrees by the Virginia seminary and Sewanee: The University of the South.

Prior to being elected in 2012 as the 10th bishop of the Diocese of Atlanta, Wright served as rector of St. Paul’s Episcopal Church in Atlanta.  Previously, he was Canon Pastor and Vicar of the Congregation of St. Saviour at the Cathedral of St. John the Divine in New York City, and as chaplain of the Cathedral School.

Since becoming bishop of the diocese, which includes 114 worshiping communities in the northern half of Georgia, Wright has been a vocal advocate for improving the lives of children, prisoners, immigrants and military members and their families.

As bishop, Wright has addressed the Georgia legislature, urging passage of sensible gun safety laws, spoken up for Medicaid expansion and has been a vocal and active opponent of the death penalty in Georgia.  His pastoral examples include marking the birthday of Dr. Martin Luther King by praying with City of Atlanta sanitation crews before taking an early morning shift on the back of a city garbage truck. In 2015, Wright was named among the 100 Most Influential Georgians by GeorgiaTrend magazine.

The Atlanta diocese was carved from the Diocese of Georgia in 1907, and includes 75 ½ counties stretching from south Columbus and Macon to the state’s borders with South and North Carolina and Tennessee.