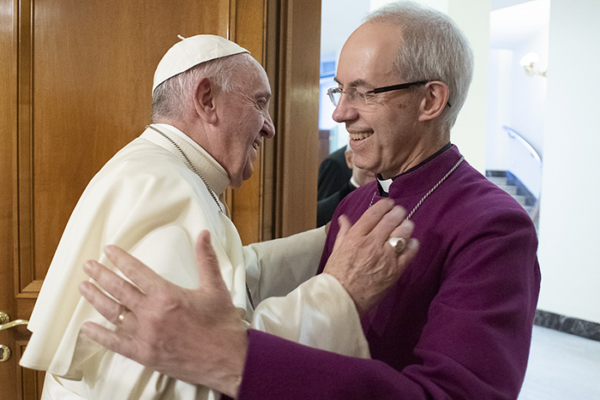 Pope Francis and Archbishop Justin Welby embrace before a private audience at the Vatican on Nov. 13. Photo courtesy ACNS

[Anglican Communion News Service] The first joint pastoral visit by a pope and an archbishop of Canterbury could take place in South Sudan early next year, the Vatican and Lambeth Palace announced last night. The news came after a private audience between Pope Francis and Archbishop Justin Welby at the Vatican’s Casa Santa Marta guest house.

“During the friendly talks we focused on the condition of Christians in the world and on some situations of international crisis, with particular reference to the painful reality facing South Sudan,” the Vatican Press Office said in a bulletin. “At the end of the meeting the Holy Father and the Archbishop of Canterbury agreed that, if the political situation in the country should allow the establishment of a transitional government of national unity in the next 100 days, at the expiry of the agreement signed in recent days in Entebbe, in Uganda, they intend to visit South Sudan together.”