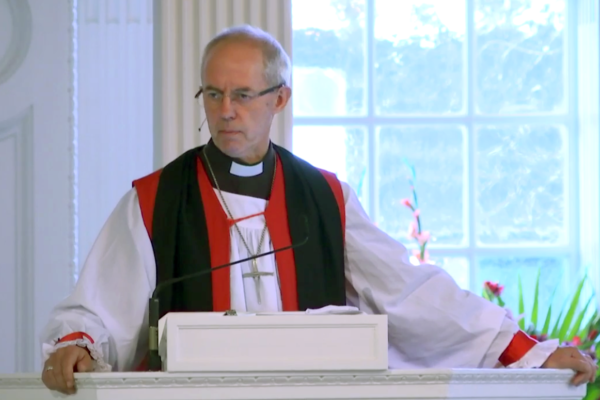 Archbishop of Canterbury Justin Welby preaches Sept. 23 at Trinity Church Wall Street in this image from the congregation’s video of the sermon.

[Episcopal News Service] Archbishop of Canterbury Justin Welby spoke of the vision, wisdom and light that the Gospel and followers of Jesus can bring to “a world of puzzlement and confusion” in sermons during recent stops on a trip to the United States.

Welby, head of the Anglican Communion, was in Dallas, Texas, last week to participate in a vocational conference, and he preached Sept. 23 at Trinity Church Wall Street in New York with a message to spread the wisdom of the Gospel to the world.

“The reality of Jesus is seen in a holy people of prayer, who desire God from the bottom of their hearts,” Welby said at Trinity Wall Street.

“The search for God-centered wisdom from above, the holy understanding of what to do now, begins with our identity, which is found truthfully in Christ alone,” Welby said. “That will only happen when we are outward-looking.”

He praised Trinity Wall Street for its outward focus in seeking to serve others, and he emphasized the importance of practicing simplicity and heeding God’s wisdom from above.

“Christ called his disciples to ‘go,’ … But to go we must listen,” he said.

The sermon drew on a range of allusions, from the threat of climate change to the example of a Catholic archbishop who spent time in captivity during the Vietnam War. The text of the sermon is here; a video is here.

His earlier appearance in Dallas kicked off Sept. 20 with a joint event with Presiding Bishop Michael Curry at Saint Michael and All Angels Episcopal Church. Welby and Curry spoke about love and reconciliation in today’s world in a discussion sponsored by the American Friends of the Anglican Centre in Rome.

That event was followed later in the day by Welby’s appearance at RADVO, which stands for Radical Vocation, a three-day conference on discerning the call to priesthood. It was presented by Communion Partners, http://communionpartners.org/ a group of Episcopal and Anglican traditionalists.

Welby preached at the Evensong on Sept. 20 at Church of the Incarnation, Dallas.

“Let me be clear; although as Anglicans we are already in a church divided globally since the Great Schism, and far more so since the Reformation … we are called in everything we do to be together, despite all the difficulties involved,” Welby said.

Christians also are called to be “children of light,” he continued.

“The nature of ordained ministry is to seek to ensure that the church shines a light that illuminates,” Welby said, “and yet to find oneself doing that in a confusing world, where options and choices often have the appearance of equal validity.”

The text of Welby’s sermon can be found here.

The post Archbishop of Canterbury on US trip preaches of God’s wisdom as light for confused world appeared first on Episcopal News Service.