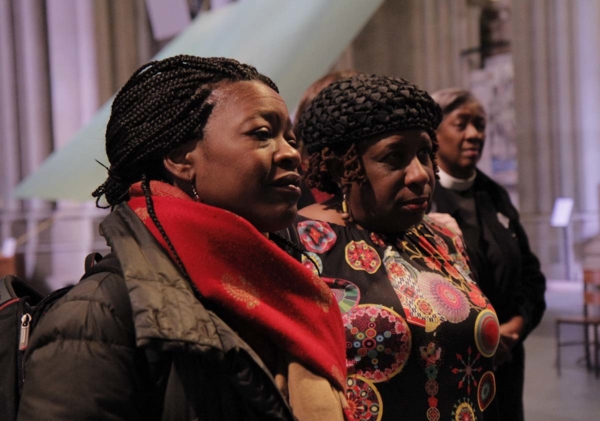 Episcopal UNCSW delegates Chiseche Mibenge, Diocese of El Camino Real, left, and Michele Roberts, Diocese of Delaware, stand together March 17 during a tour of the Cathedral Church of St. John the Divine in New York. The 63rd annual United Nations Conference on the Status of Women is underway at U.N. headquarters. Photo: Lynette Wilson/Episcopal News Service

[Episcopal News Service] The annual United Nations Conference on the Status of Women draws 9,000 women and men from all the regions of the world to the U.N.’s New York headquarters.

“It (the Commission on the Status of Women) is one of the largest feminist gatherings in the world,” said first-time UNCSW Episcopal delegate the Rev. Martha Korienek, interim rector of Grace Episcopal Church in Hastings-on-Hudson, New York.

Still, as impressive at the attendance figure is, more important, she added, is that the delegates advocate for an estimated 3.7 billion women and girls worldwide.

The 63rd UNCSW, meeting March 11-22, is focused on social protection systems, access to public services and sustainable infrastructure for gender equality and the empowerment of women and girls.

“Ensuring equal access, and gender equality, is good not just for women and girls, but for everyone,” said Lynnaia Main, who represents The Episcopal Church at the United Nations and coordinates and leads the Episcopal delegation.

“As we prepare for the 25th anniversary of the Beijing Declaration and Platform for Action next year, we are aware that no country has yet achieved gender equality,” she said. “We have heard from the U.N. secretary general that, at the current rate, it will take 217 years to achieve gender equality. Presiding Bishop Michael Curry reminded us in his video to the UNCSW delegates that Jesus believed that women and men are equal and honored women by his example. We need to follow Jesus’s example and at the same time step it up for gender equality.”

For Michele Roberts, a first-time Episcopal delegate and a long-time fighter of environmental racism, the theme access to public services and sustainable infrastructure profoundly resonates.

“We have the global south right here,” said Roberts, a member of St. Andrew and St. Matthews Episcopal Church in Wilmington, Delaware, and The Church of the Epiphany in Washington, D.C.

Meaning, one doesn’t have to travel to remote villages in the developing world to encounter inadequate infrastructure and restricted access to potable water; inadequate services exist here in the United States, and here in New York, she said. 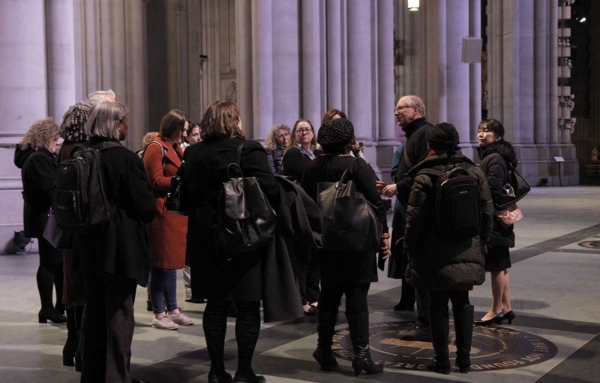 Anglican and Episcopal delegates to the United Nations Commission on the Status of Women gather at the Cathedral Church of St. John the Divine in Manhattan for a tour led by Tom Fedorek, a docent for 35 years, of the Gothic and Romanesque cathedral before a March 17 evensong. Photo: Lynette Wilson/Episcopal News Service

On March 17, Anglican and Episcopal delegates gathered at the Cathedral Church of St. John the Divine, first for a tour of the Gothic and Romanesque cathedral, and then for an evensong and welcome from the cathedral and from New York Bishop Andrew Dietsche and the Global Women’s Fund of New York.

Established in 1946, the UNCSW is the foremost intergovernmental agency dedicated to the promotion of gender equality and the empowerment of women. Although The Episcopal Church has had a presence at the UNCSW since 2000, it has sent a delegation to official UNCSW proceedings only since 2014, when it gained consultative status with the U.N. Economic and Social Council.

Even though the United Nations is considered an international territory, delegates from countries that require U.S. entry visas must apply them. Each year, the U.S. denies a significant number of delegates access; this year the U.S. denied entry visas to the Anglican delegate from Burundi and the Episcopal delegate from Colombia. The Episcopal and Anglican delegates represent women from the United States, Ghana, South Africa, New Zealand, the Solomon Islands and Scotland.

The Episcopal Church and Anglican Communion are members of and participate in advocacy with the faith-based coalition Ecumenical Women, an international coalition of church denominations and ecumenical organizations that have status with the U.N. Economic and Social Council; these bodies share and are committed to a common mission and vision.

Both The Episcopal Church and the Anglican Communion are signatories to Ecumenical Women’s joint written statement, found here.

During the commission’s annual two-week session, representatives of U.N. member states, civil society organizations and U.N. entities gather at the U.N. headquarters in New York. They discuss progress and gaps in the implementation of the 1995 Beijing Declaration and Platform for Action, the key global policy document on gender equality, and the 23rd special session of the General Assembly held in 2000 (Beijing+5), as well as emerging issues that affect gender equality and the empowerment of women. Member states agree on further actions to accelerate progress and promote women’s enjoyment of their rights in political, economic and social fields. The outcomes and recommendations of each session are forwarded to the U.N.’s Economic and Social Council for follow-up.

In her evensong homily, New York Assistant Bishop Mary D. Glasspool talked about how it “takes real willpower to do something counterintuitive” and referenced the day’s Gospel reading, Luke 13:31-35, where Jesus says in reference to Herod, “Go and tell that fox for me, ‘Listen, I am casting out demons and performing cures today and tomorrow and on the third day I finish my work. Yet today, tomorrow, and the next day I must be on my way, because it is impossible for a prophet to be killed outside of Jerusalem.’ Jerusalem, Jerusalem, the city that kills the prophets and stones those who are sent to it! How often have I desired to gather your children as a hen gathers her brood under her wings, and you were not willing.”

United Nations Commission on the Status of Women (UNCSW)