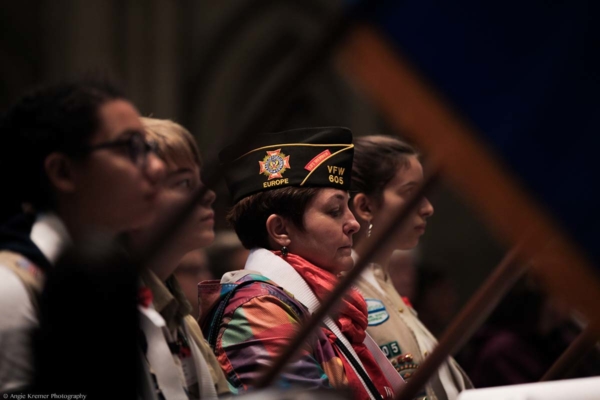 A veteran attends a memorial service at the American Cathedral in Paris on Nov. 11. Photo: Angie Kremer

[Episcopal News Service] On Nov.11 at 11 a.m., the worship service at the American Cathedral in Paris paused so parishioners could listen to the peals of church bells sound across the City of Lights, just as they rang 100 years ago to signal the Armistice and the end of Word War I.

As the United States observes Veterans Day today, around the world and especially throughout Europe, special events—including visits by dozens of heads of state—have been held to mark the centennial anniversary of the end of the Great War. The American Cathedral, part of the Convocation of Episcopal Churches in Europe, commemorated the occasion with two special events.

The convocation’s bishop-elect, the Rev. Mark D.W. Edington, preached at the memorial service on Sunday. And on Nov. 10, the cathedral rededicated the Battle Memorial Cloister, the first monument ever erected for the American casualties of World War I, according to historian and parishioner Ellen Hampton.

In a video about the cloister, Hampton shared that shortly after the war ended, families began asking to erect plaques in honor of their loved ones, but the priest and vestry opted for another, all-inclusive memorial, and raised funds for the Battle Memorial Cloister. The memorial honors the 116,000 American casualties of World War I, as well as civilian units that supported France before the United States officially entered the conflict in 1917.

The cloister is lined with plaques commemorating the fallen and features the insignia of the American armed forces, as well as scenes from major battles.

Ironically, little room was left in the cloister for plaques for the dead in World War II. When the cloister was designed, there was no thought of it needing to be bigger; World War I was considered then to be the war to end all wars, Hampton explained.

Parishioners Charles Truehead and Ann Dushane, along with the Very Rev. Lucinda Laird, the cathedral’s dean, have led the arrangements for the commemoration events. The rededication on Nov. 10 featured World War I poetry and special music.

At the close of the service, attendees placed poppies on a wreath of remembrance, a tradition with its origins in the 1915 poem “In Flanders Fields” by John McCrae.

“Something our bishop-elect wrote recently might help put this in context,” said Truehead. “He wrote that a church is a community of memory…Here is an example of memory with a capital M, where we are coming together to remember the dead and the people who came before us at the cathedral for something that mattered for them and was cataclysmic to the world.”

For the American Cathedral, participating in this type of commemoration is part of its duty, Truehead said, both as a worshiping community and as a cathedral committed to opening its doors to the broader community. This dedication to community has been a hallmark of the church throughout its history. The Rev. Jason Leo, now canon for transitions and congregational vitality for the Diocese of Southern Ohio, grew up at the American Cathedral, when his father Jim served as dean.

“Every year on the anniversary of D-Day, there were celebrations and commemorations throughout the city,” Leo said. “The cathedral was a hub for all of this. I was 16 years and remember sitting in a pew behind a U.S. president during a service and thinking that this was a pretty big deal. But certainly, the most moving experience was to look out into that enormous worship space and see one veteran in kneeling in silence: the memories of friends, immeasurable sacrifice, and the blessing of freedom, all being offered to God in prayer.”

During the service, Truehead shared the story of one of the Americans who volunteered to fight in the foreign war: a young poet, Alan Seeger, who died on July 4, 1916. His name might sound familiar. The American Library in Paris was created, in part, to honor Seeger’s history, and his way with words became a family tradition, carried on by his nephew, folk singer Pete Seeger, Truehead said.

The service included one of Seeger’s poems, “I have a rendezvous with death.” In the poem, Seeger contrasts the life he could have led, “Pillowed in silk and scented down … Where hushed awakenings are dear…” with the one that he chose in the fight for freedom, “At midnight in some flaming town,/ When Spring trips north again this year, / And I to my pledged word am true.”