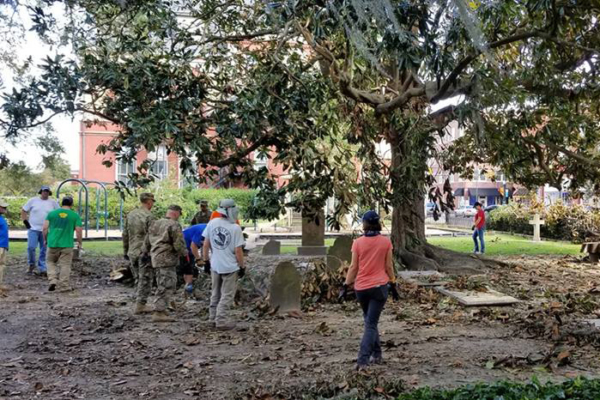 [Episcopal News Service] What does hurricane recovery look like to the Rev. Ron Abrams? Hurricane Florence, which devastated parts of the Carolinas two weeks ago, downed a tree but did little other damage to the church grounds and facilities of St. James Parish in Wilmington, North Carolina, where he is rector.

Abrams downplayed the damage at St. James. For him, the image of hurricane recovery is one of goodwill and an eagerness to help others, some of whom have lost nearly everything.

“People are really caring about each other. I’ve seen the best of the human spirit,” Abrams told Episcopal News Service. “You just hope the goodwill continues, but it’s going to take a while. There’s some real significant damage.”

Episcopal congregations and dioceses in the path of the storm, with support from Episcopal Relief & Development, have rallied behind their communities in a range of ways, from the “de-mucking” crew of parishioners assembled by St. James to the supplies drive organized by Christ Episcopal Church in New Bern, North Carolina, another city hit hard by the storm.

Since Florence made landfall Sept. 15 near Wilmington, congregation members have taken the lead in serving as the Episcopal Church’s outreach ministers to their communities. The Diocese of East Carolina, which includes the coastal third of North Carolina, has remained in regular contact with local clergy, and Bishop Rob Skirving will travel to Wilmington on Sept. 28 for a three-day visit with clergy, parishioners and residents.

One of Skirving’s goals is “just being present with them, trying to be supportive,” he said in an interview with ENS.

Within the first two days of the storm’s arrival, he and two of his canons teamed up to contact more than 100 diocesan clergy members by phone to make sure they were all right and to check on their congregations’ initial needs. A week ago, on Sept. 20, Skirving visited New Bern to meet with Christ Episcopal Church clergy and some of the residents who were cleaning up their houses after floodwaters receded.

One of his first stops Sept. 28 will be a meeting with clergy of the deanery at St. Philip’s Episcopal Church in Southport, near Wilmington – a chance to bring people together to talk about their experiences in this time of struggle.

“While it’s not as critical as some of the hands-on relief work, it’s still an important part,” Skirving said.

Churches along the North Carolina coast are helping with the hands-on work as well. St. James, the city’s oldest church, is in the center of Wilmington and was able to open its doors quickly after the storm to house relief workers needing a place to stay. Search and rescue operations are mostly concluded, and the focus has turned to clearing and gutting formerly flooded houses so they can be fixed.

“The issue with the flooding in houses is if you don’t get everything stripped to the studs before the mold sets in, the houses aren’t usable,” Abrams said.

He estimates his congregation has room to provide housing for up to 50 relief workers in the parish house and other spaces at the church. Work groups with established relief organizations have brought volunteers from all over the country to St. James, including one man from Australia. Parishioners have responded by donating supplies to help welcome the workers.

Across town, Church of the Servant Episcopal Church also made it through the storm without much damage, and since then the Rev. Jody Greenwood, rector, has been checking in on her parishioners as they assess the status of their properties.

Some lost trees and fences, Greenwood said. Others are dealing with damaged cars and flooded homes. Greenwood, too, is saying at a friend’s house while her own roof is repaired after being damaged during Florence. But even the lucky ones who escaped great personal loss can feel the trauma of an upended landscape that no longer looks familiar.

“I think the emotional wear and tear of seeing things that felt so secure become less secure needs to be taken seriously,” Greenwood said.

She also has attended meetings of an ecumenical group that is helping to coordinate long-term relief efforts. The group secured a warehouse for six months to hold supplies; use of that facility could be extended another six months, she said.

“It’s going to be a long process,” Greenwood said.

After canceling Sunday services in the immediate aftermath of the storm, the congregation combined its normal three services to one on Sept. 23. More than 100 parishioners attended, though many were still out of town after fleeing the storm.

Greenwood expects attendance will swell on Sept. 30. “I think people just really want to see each other,” she said, and Skirving is scheduled to preach at the service.

In New Bern, the Rev. Paul Canady, rector of Christ Episcopal Church, said Florence left about 15 families and individual members of the congregation homeless, either because their houses are in need of significant repairs or are beyond repair.

He noted that even parishioners whose homes sustained major damage are out in the community offering to help their neighbors. Outside groups also have arrived to assist New Bern in bouncing back.

Although Christ Episcopal Church mostly was spared by Florence, the storm left a trail of tree branches and debris in the church playground. A group from St. Martin’s-in-the-Fields Episcopal Church in Columbia, South Carolina, which is staying at Canady’s church this week while they help with relief efforts, spent time in the playground Sept. 24 leading a cleanup.

Life in New Bern may not return to normal for a while. The schools have canceled classes the past two weeks, and Canady, whose children are in first and fourth grades, wasn’t sure as of early Sept. 27 whether classes would resume next week. Some school facilities are still serving as shelters, and other schools were damaged in the storm or need to be tested for mold.

Worship services at Christ Episcopal Church resumed Sept. 23, after the power was restored and the air conditioning was up and running again. Canady, though, said his focus has been on getting into the community and checking in with parishioners.

Greenwood said she grew up on Long Island, New York, and experienced her share of hurricanes, but they didn’t prepare her for Florence.

“This one was pretty bad,” she said. “I’ve had parishioners in their 90s tell me this was the worst hurricane they’ve ever seen.”

The post Aftermath of Hurricane Florence brings out ‘best of the human spirit’ in coastal North Carolina appeared first on Episcopal News Service.