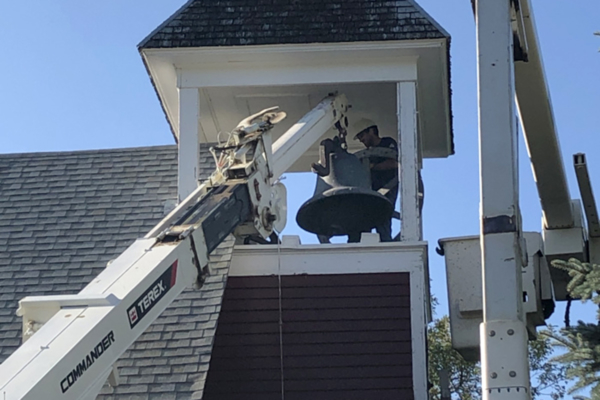 Utility workers help lower the bell from Episcopal Church of the Incarnation in Gregory, South Dakota, so it can be transferred to Norris, where St. Paul’s Episcopal Church’s bell was stolen in January 2018. Photo: Rosebud Indian Mission

[Episcopal News Service] The theft of a century-old church bell has been a disheartening blow to the congregation at St. Paul’s Episcopal Church just north of Norris, South Dakota. The bell, a beloved fixture of the local community, was discovered missing in early January 2018, and it has never been found or returned.

Among those furnishings: a bell, hanging more than 25 feet up in the church’s steeple.

The two churches are both part of the Rosebud Indian Mission, which ministers to a region that includes the Rosebud Indian Reservation. Now, church leaders and worshipers from across the Rosebud Episcopal Mission are celebrating the gift of Incarnation’s old bell to the congregation in Norris, where it will become a next-best-case replacement for St. Paul’s stolen bell.

“The bell hasn’t been rung in about 10 years,” the Rev. Annie Henninger said in a blog post. She serves the congregations on the Rosebud Indian Mission’s eastern half. “I’m really sad to see the church close, but it is so good to have parts from the church go elsewhere.”

The Rev. Lauren Stanley, who is assigned to the mission’s western congregations, including St. Paul’s, traveled with members of that congregation to Gregory on Sept. 20 to claim the bell. Given its high perch and substantial weight, they received assistance from utility workers from Rosebud Electric Cooperative. The workers removed the bell from the steeple and lowered it into the back of Stanley’s pickup truck.

“I am so impressed by everyone who came out today,” Stanley said in the mission’s blog post, which noted that this bell is cast steel, as opposed to the stolen bell’s iron and brass. “It won’t be the same bell, or even the same bell tone … but it will ring all the same, and I’m confident it will bring joy to all the ancestors.” 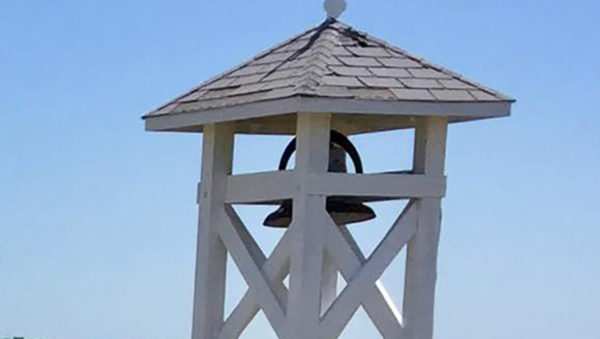 St. Paul’s Episcopal Church just north of Norris, South Dakota, was founded in 1890, and its bell could be nearly as old. Decades ago it was used to summon worshipers to St. Paul’s for the monthly service and a community gathering, which would stretch over multiple days. Photo: Lauren Stanley, via Facebook.

St. Paul’s was founded in 1890, and the bell was thought to be nearly as old. Decades ago, it was used to summon worshipers for the congregation’s monthly services, and it rang to notify local residents of major news. The thieves who took the bell also toppled the small wooden tower that housed it next to the small church building, located on tribal land just outside the boundaries of the Rosebud Indian Reservation.

Stanley tried publicizing the theft to generate information that might lead to the bell’s discovery, and the congregation offered forgiveness to whoever took it, asking for its prompt return. No one came forward.

Instead, the congregation at St. Paul’s is thankful for the opportunity to receive Incarnation’s bell, which Stanley said is larger and heavier than the old bell. A new tower will be built to house the transferred bell at a nearby mission chapel in Norris. The bell is in storage in the community of Mission until the tower is ready.

Stanley added that her goal is to have it in place in time for a memorial in November for an elder, Emmaline Eagle Bear, who died late last year.

“I want Emmaline and all the ancestors to hear this new bell ringing all the way to heaven,” she said in the mission’s blog post.