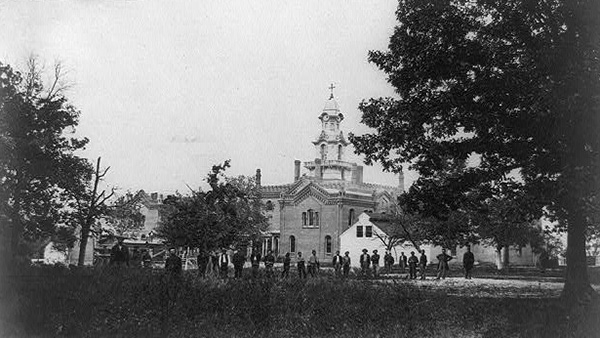 [Episcopal News Service] Virginia Theological Seminary took what appears to be an unprecedented step this week by announcing that it had set aside $1.7 million for a slavery reparations fund – something considered but not yet enacted by other institutions of higher education that historically benefited from slave labor.

Enslaved African Americans worked on the Alexandria campus of Virginia Theological Seminary, which was founded in 1823, and at least one building, Aspinwall Hall in 1841, was built with slave labor. Black students were excluded from attending the Episcopal seminary until the 1950s.

“As we seek to mark [the] seminary’s milestone of 200 years, we do so conscious that our past is a mixture of sin as well as grace,” VTS Dean Ian Markham said in a press release. “This is the seminary recognizing that along with repentance for past sins, there is also a need for action.”

Income from the endowment fund for reparations will be put to use in a variety of ways, from encouraging more African American clergy in The Episcopal Church to directly serving the needs of any descendants of the enslaved Africans who worked at the seminary. 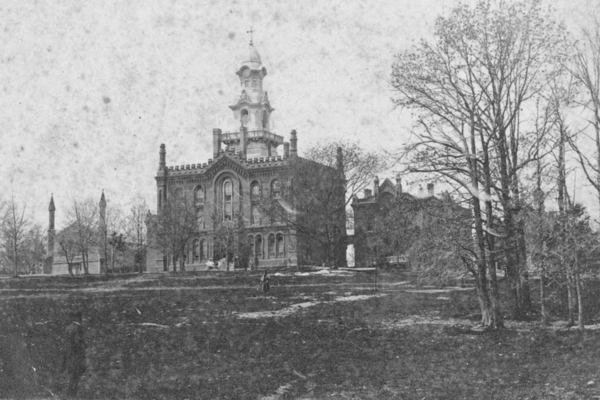 The seminary’s announcement comes amid a growing national conversation over reparations as one way to atone for the American systems of slavery and segregation, rooted in the Colonial era and still showing lingering effects on society today. While Democratic presidential candidates have been asked for their views on the subject this year, Episcopal Church leaders have taken a lead in speaking in favor of reparations, most recently Maryland Bishop Eugene Sutton.

“Everyone living in our great nation has inherited a mess created by the institution of slavery,” Sutton testified in June at a congressional hearing on reparations. “None of us caused this brokenness, but all of us have a moral responsibility to fix it.”

Speaking a month after his diocesan convention approved a racial reconciliation resolution that raised the prospect of reparations, Sutton noted in his testimony that reparations are not simply about monetary compensation, but rather repairing what is broken. “An act of reparation is an attempt to make whole again, to restore, to offer atonement, to make amends, to reconcile for a wrong or injury.”

The issue has been particularly active in the academic world, with numerous colleges and universities founded before the Civil War grappling with their own histories of racial injustice. More than 50 of them, including Sewanee: University of the South in Tennessee, have joined a coalition called Universities Studying Slavery to research that history.

Sewanee has not yet taken up the topic of reparations directly, though its Robertson Project on Slavery, Race and Reconciliation includes among its goals “to consider the obligations that Sewanee’s history places on us in deciding how we can become a more equitable, inclusive, and cohesive university community.”

Students at Georgetown University have pushed a measure that would raise a reparations fund at the Jesuit university in Washington by adding a fee to students’ tuition bills. Georgetown is a prominent case because of its own research into the 272 campus-owned slaves who were sold in 1838 to save the school from closure.

The proposal to raise money for reparations through student fees has been called unprecedented. A headline in The Atlantic from April described the student proposal as “The First Reparations Attempt at an American College,” and a Politico article from the same month carried the headline “This Could Be the First Slavery Reparations Policy in America.”

If that was hypothetically true for Georgetown in April, VTS actually might be the first now.

The seminary’s Office of Multicultural Ministries will administer the fund “as part of our commitment to recognizing the racism in our past and working toward healing and reconciliation in the future,” the seminary said in its press release.

It specified five ways the income from the fund might be spent:

“Though no amount of money could ever truly compensate for slavery, the commitment of these financial resources means that the institution’s attitude of repentance is being supported by actions of repentance that can have a significant impact both on the recipients of the funds, as well as on those at VTS,” the Rev. Joseph Thompson, director of VTS’ Office of Multicultural Ministries, said in the seminary’s release.

Thompson, in an interview with Episcopal News Service, said the seminary expected to be able to spend about $70,000 a year from endowment income. The seminary has engaged in racial reconciliation efforts for a while, he said, but those efforts took a big step forward about 10 years ago when Markham, the dean, issued a public apology for the seminary’s complicity in slavery.

Conversations at VTS about reparations grew in urgency in recent years as the national debate over racial relations intensified.

“With everything that’s been going on in society around us and more attention being paid to the idea of reparations, people began to think about the material consequences of slavery and of racism and wanting to do something to repair that,” Thompson said.

The seminary’s first steps will be to try to identify descendants of slaves who were forced to work at VTS and to reach out to the local community.

For decades, The Episcopal Church, too, has emphasized fighting racism and fostering racial reconciliation while shining a light on the church’s own past involvement with slavery and segregation. A 2000 resolution passed by General Convention called on the church to “overcome its historic silence and complicity … in the sin of racism.”

In 2006, General Convention passed another resolution supporting federal legislation that would confront the country’s legacy of slavery and take a step toward “monetary and non-monetary reparations to the descendants of the victims of slavery.”

The Diocese of Maryland, under Sutton, has been a churchwide leader in identifying its congregations’ ties to slavery, through its Trail of Souls research project and pilgrimages. And in 2016, a reparations resolution at its diocesan convention, though not approved, advanced that conversation in the diocese.

Three years later at Maryland’s 2019 convention, Sutton read a pastoral letter that called on his diocese to again consider what reparations might look like.

“The subject of reparations is mired in emotion,” he said. “It is often mischaracterized and certainly largely misunderstood. It is a complex issue that involves economic, political and sociological dimensions that are difficult to grasp without a willingness to engage more deeply than having a quick emotional response to the word.”

Sutton also cautioned that the church sees this issue from the perspective of faith, not politics. His subsequent congressional testimony, however, and his follow-up interview with Fox News’ Tucker Carlson sparked a conservative backlash that Sutton acknowledged in a message to his diocese.

Critics sent him “hate-filled messages” that questioned his integrity, sanity and faith, Sutton said. That response was expected, he said, but it shouldn’t deter him, the diocese or the country from facing the truth of its past.

“We came to the decision to affirm the principle of moving forward with some form of accounting for how we gained materially and financially from an evil institution,” Sutton said. “If our diverse diocese can come together on this issue in such a respectful way, then let’s not give up on the notion that our nation can do the same.”